America's favorite petulant child fires off what many are concluding is a follow up to his now famous twitter tirade directed at “low I.Q. Crazy Mika”. President Trump, a former fan of Ms. Brzezinski, is now denying that he ever offered to officiate the wedding of the two television personalities.

The president previously described Ms. Brzezinski as “low I.Q. Crazy Mika” and claimed in a series of Twitter posts that she had been “bleeding badly from a face-lift” during a social gathering at Mr. Trump’s resort in Florida around New Year’s Eve. The White House did not explain what had prompted the outburst, but a spokeswoman said Ms. Brzezinski deserved a rebuke because of her show’s harsh stance on Mr. Trump. NYTimes
- June 30, 2017 1 comment:

No need to guess where the White House is getting its crazy ideas, West Wing Reads provides a window into how to best cherry pick "articles". It's shocking that the White House fails to differentiate between hack opinion pieces and actually researched journalism.

Case in point, the first headline:

- Josh Archambault in Forbes
"Reality check! An analysis by Forbes contributor Josh Archambault reveals surprising flaws in the CBO’s score of the Senate healthcare bill, which concludes 22 million more Americans will be without health coverage by 2026. As Archambault points out, the CBO score is based on an old, inaccurate 2016 CBO estimate of how many Americans will purchase Obamacare. If you use their January 2017 update, Republican legislation to repeal and replace Obamacare would result in only 2 million fewer on the individual market by 2026, and would actually result in no losses and even some gains in enrollment in the years preceding, Archambault estimates."
Forbes Magazine is a real publication that writes real news. Josh Archambault does not work for Forbes magazine; Archamault is employed by The Foundation for Government Accountability (FGA). While Trump invokes Forbe's name to give the article a facade of credibility, opinions expressed by Forbes Contributors are their own. FGA is a Koch backed, right-wing advocacy group based in Naples, Florida. It is run by former Maine legislator Tarren Bragdon. It is a member of the State Policy Network (SPN), a web of state pressure groups that denote themselves as "think tanks" and drive a right-wing agenda in statehouses nationwide. Source.
A study funded and written by the organization contributed to Florida Governor Rick Scott's defense of his controversial welfare drug-testing law, requiring benefit recipients to take a drug test as a qualification for benefits. The law came under fire from the ACLU and other groups, and a Bush-appointed federal judge threw out the Foundation's study as evidence, claiming it was "not competent expert opinion" and that "even a cursory review of certain assumptions in the pamphlet undermines its conclusions."Source
With all the resources of the federal government, the best support the White House has is the opinion of Koch brother backed think tank, which fails to divine how taking a trillion dollars out of healthcare to give to America's 400 wealthiest families won't negatively effect the majority.
- June 29, 2017 No comments:

Orrin “Dipsy Doodle” Hatch: "She was asking for it. Don't want to be fondled, don't go in the Oval Office"

Orrin “Dipsy Doodle” Hatch: "She was asking for it"
Slate Reporting
Orrin Grant Hatch, has been the President pro tempore of the United States Senate since January 2015, a  member of the Republican Party, he serves as the senior United States Senator for Utah, and, since November 2016, an outspoken Trump enabler.
Hatch, a staunch supporter of capital punishment and harsh “3-Strikes” legislation, was quick to chalk Great Leader Trump’s recent breast fondling, pussy grabbing, and reporter slandering up to a ''Dipsy Doodle.''
This is quite fitting, as “Dipsy Doodle” was famously last evoked by Ronald Reagan to belittle foes of trickle-down economics, genius idea being trumpeted by the current administration.
Mr. Reagan's characterization of estimates by Democratic politicians that tax cuts and defense spending would drive up the deficit as ''real dipsy doodle.'' Evidently the President was deeply impressed by the dance-hall lingo of the 1930's.
''Dipsy Doodle'' was a song composed by Larry Clinton in 1937 and dealt with the reversal of words and expressions, such as ''You love I and me love you.'' The origin of the phrase is labeled as unknown by Merriam-Webster, but to speculate, dipsy might come from dipsomania, now called ''alcoholism,'' and the slang shortening to dipso (from the Greek dipsa, ''thirst''). A second possibility: from the dance dip, in which the man pulls the woman toward him, then bends his knee and swoops forward as if imitating Groucho Marx's walk.
The doodle part is easier: In German, Dudeltopf means ''nightcap,'' the sort worn by a simpleton. The doodle added a humorous alliterative fillip to the phrase; even today, the verb to doodle means ''to draw idly,'' giving some substance to the theory of etymologists who argue that it is a variant of dawdle. Doo is the sound of the simpleton, as he fiddles with doodads and doohickeys. (Doo wha'?)
As baseball fans know, the dipsy doodle was taken up as the name for a sinking curve ball, or sinker, or dip. ''Dutch'' Reagan began his career as a baseball announcer, and may have picked up the phrase in this phase of his career. Without delving into linguistic psychohistory, it seems likely that the President associated ''a real dipsy doodle'' with trickery or chicanery, as the phrase for a curve ball soon became a favorite with mystery writers: ''I opened the front door, leaving the key in the lock,'' wrote Raymond Chandler in ''High Window.'' ''I wasn't going to work any dipsy doodle in this place.''
History Source: NY Times Archives

Obama and Trump are both furious that multiple photographs of President Obama's engorged member have been appearing on the current first lady's cellular device.

This crotch caper is the apparent result of the former president's aides substituting Melania's number for Michelle's, as Obama continued using the nickname "FLOTUS" for his wife after leaving office. Current FLOTUS failed to inform Obama of the mix up; Obama only learning of the snafu after inquiring as to why Michelle was being so prude (she usually is quick to reply with her own naughty messages).

We all know President Obama is a prolific texter of cock-shots, but, unlike Crooked Hilary collaborator Anthony Wiener, has until now refrained from sending them to anyone but his wife.

WH Staffers reported lady's laughter, followed by sounds an old man screaming and crying. It's unclear if the two stories are related. Melania has refused to remove her over-sized sunglasses for the last 27 hours, leading many to speculate she recently got LASIK.
- June 29, 2017 No comments:

When reporter Caitriona Perry attended a press briefing with US President Donald Trump she probably didn't expect it would spark a debate about workplace sexism.
The RTE Washington Correspondent was at the Oval Office on Tuesday to cover a diplomatic phone call between the US leader and Irish Taoiseach Leo Varadkar.
But as the two leaders discussed Mr Varadkar's new position, and the number of Irish migrants in the US, Mr Trump interrupted the call to fondle Ms Perry's left breast, remarking “What a beautiful dairy?” 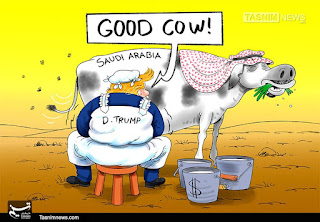 No surprise that MSM had taken this beautiful, presidental compliment out of context, attempting to equate Trump's uninvited touching with an assault and battery.

Perry looked fully covered in her bikini and far less stoked about the situation. “He had the willy out,” the Australian radio show reminded Perry of her then-boyfriend. “Why weren’t you also nude in that? Did you have the foresight to realize there could be photographers here, but he was like, ‘Nah, they’ll be none, pet’?” Apparently, Bloom tried to get Perry on board. “He asked me if I wanted to [be naked], and I was like, you know, it was one of those things where I was like, ‘Ah, no,’ ” she said. 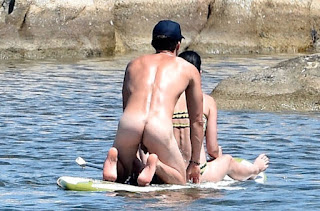 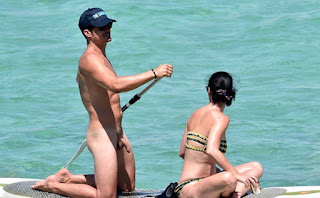 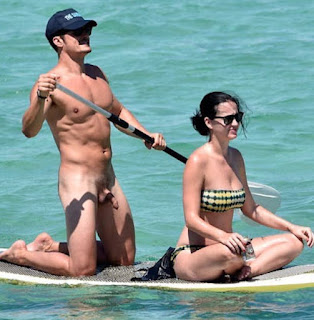 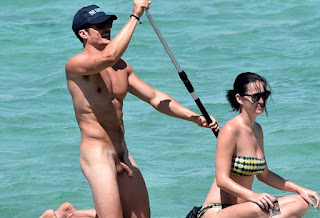